British charity Comic Relief has appointed former Kantar CEO Eric Salama as Chair of the Board of Trustees, replacing Tim Davie, BBC Studios CEO, who has served on the Board since September 2013. 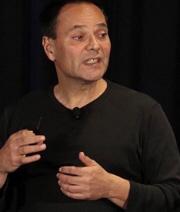 Comic Relief raises money to support vulnerable people and communities. Salama (pictured) left insight and data consultancy Kantar earlier this year, following WPP's decision to sell a 60% stake in the group to Bain Capital. He had worked for the WPP group since 1994, after it acquired consumer consultancy The Henley Centre, where he latterly served as Joint MD; and for the past eighteen years, he led Kantar to become an organisation with more than $4bn revenue and 30,000 employees. Salama began his career as a researcher and speechwriter for The Labour Party Foreign Affairs Team in the House of Commons, and he previously served as an advisor to the Government on eCommerce and business, and as a non-executive director at DFID (The Department for International Development).

He will formally start the role of Chair of the Comic Relief Board on 1st July, overseeing the charity's long-term response and new ways of operating in light of the Covid-19 pandemic. Ruth Davison, CEO of Comic Relief, comments: 'This is a crucial moment for the charity as we face new challenges and refresh our strategic goals and vision. Tim Davie has been a brilliant Chair and I'm confident that Eric's strong leadership and unique mix of business and creative expertise will put Comic Relief on the path to even greater success'.