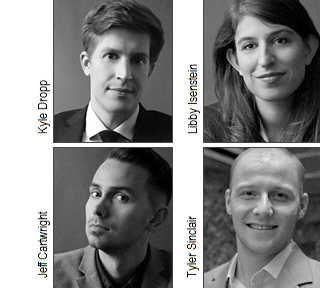 Co-founded in 2014 by Michael Ramlet (CEO), Alex Dulin (CTO) and Dropp (formerly Chief Research Officer), Morning Consult surveys tens of thousands of respondents across the globe every day to assess what people think in real time, and determine how their decisions impact business, politics and the economy. Since helping launch Morning Consult, Dropp has led the firm's Research division, overseeing research relationships with companies, media organizations and industry trade associations. Prior to this he served as an Assistant Professor in the Department of Government at Dartmouth College; and was a Researcher in the Stanford Spatial Social Science Lab; a Research Assistant for the Harvard Election Data Archive; and he worked in the Washington Post's polling division prior to graduate school.

Isenstein joined the company in 2016 as Creative Director, and prior to her promotion served as VP of Product; having earlier been a Graphic Artist at the National Journal, and Web Producer at Politico. Cartwright has been with the firm for five years - initially as Director of Communications, and more recently as VP of Content, Marketing & Communications. He previously held senior comms roles at the National Journal and Atlantic Media. Sinclair also joined five years ago, initially as Polling Director, before moving up to the position of VP - Client Services in 2018.

In a message to staff, co-founder and CEO Michael Ramlet said: 'With continued growth comes new opportunities across the company, and I am particularly excited to announce the promotion of Libby, Jeff, and Tyler Sincliar, as Kyle takes on the role of President. I firmly believe that we are building one of the most impactful companies of the 21st-century that is redefining how global business and government leaders make decisions because of our extraordinary people and collective capabilities'.

The company, which raised $31m in a Series A round of funding back in May and welcomed former Kantar CEO Eric Salama to its Board in July, is online at www.morningconsult.com .