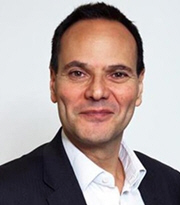 Morning Consult surveys tens of thousands of respondents across the globe every day, to assess what people think in real time, and determine how their decisions impact business, politics and the economy. In May, the company raised $31m in a Series A round of funding, which it is using to 'further accelerate its transformation of the market research industry'.

Salama (pictured) joins the Board after leaving insight and data consultancy Kantar earlier this year, following WPP's decision to sell a 60% stake in the group to Bain Capital. He had worked for the WPP group since 1994, after it acquired consumer consultancy The Henley Centre, where he latterly served as Joint MD; and for the past eighteen years he led Kantar as it became an organisation with more than $4bn revenue and 30,000 employees. Since leaving, Salama has taken the Chair of the Board of Trustees of British charity Comic Relief.