In the UK, international insight and strategy consultancy BritainThinks has appointed five Research Assistants as part of its internship scheme. 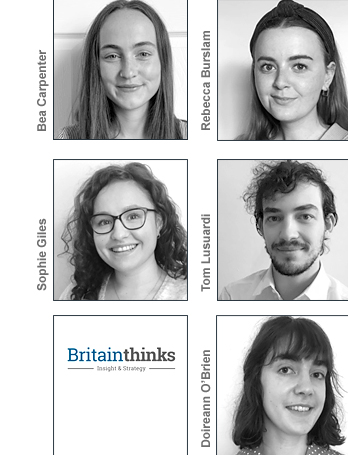 BritainThinks' six-month London Living Wage internship scheme was set up when the company launched in 2010, and almost half the company's employees began with the firm as interns. This includes two Research Directors, one of whom is Lucy Morrell, who heads up the team that runs the internship scheme.

Bea Carpenter joins with experience using various quantitative research methodologies, and a BA in Natural Sciences, Psychology and Neuroscience from the University of Cambridge. Rebecca Burslam previously worked in a research role in academia and has an undergraduate degree in Linguistics. Sophie Giles has been doing freelance work at BritainThinks, before which she gained experience with NGOs - conducting desk research and producing large scale reports - having gained a BA in History from the University of Sussex, and an MA in Near and Middle Eastern Studies from the School of Oriental and African Studies.

Tom Lusuardi previously worked in marketing and education for both the private and public sector in the UK and East Asia after completing an MA in History and Politics from the University of Edinburgh. Finally, Doireann O'Brien joins after working in research roles at the Economic and Social Research Institute, Trinity College Dublin, and the Irish Penal Reform Trust, and after completing a BA in Philosophy, Political Science, Economics and Sociology at Trinity College Dublin.

Ben Shimshon, co-founder and Managing Partner, comments: 'We are really excited to have Bea, Rebecca, Sophie, Tom and Doireann on board as part of our expanding internship programme. We look forward to working with all five of them as part of our growing team'.