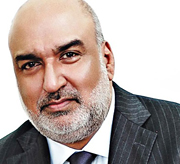 Joint industry not-for-profit body BARC (The Broadcast Audience Research Council of India), publishes weekly TV viewing data for India, and is tasked with designing, commissioning, supervising and providing a real-time TV rating points measurement system. Chopra (pictured) joined the BARC India Board in 2016 and was subsequently appointed Chairman, and early last year appointed to its Oversight Committee. He previously spent more than twenty years at Publicis, latterly as CEO Asia, and has since served as a Senior Advisor to Publicis Communications India.

Lulla, whom he replaces, had held the CEO role since 2019 when former CEO Partho Dasgupta was arrested on charges of 'manipulating' the country's ratings data. In March, The Bombay High Court granted Dasgupta bail, saying that as the investigation has been completed, custodial detention was no longer necessary. Then last week, Ashish Bhasin resigned from the Board of BARC India citing 'personal reasons'. He had been heading the Audit Committee that conducted an internal investigation following the allegations of corruption at BARC India.

Prior to leaving, Lulla commented: 'I am privileged to have been able to contribute to BARC and this has been possible only because of the excellent team of professionals, a very supportive Board and the gold standard of Board-appointed committees. I wish Nakul Chopra, every success'.