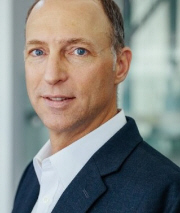 Founded in 1997 as Thomson Intermedia, Ebiquity comprises an Analytics division, offering media buying measurement and benchmarking, and performance measurement; and a 'Platform' division which provides media monitoring products. Waters (pictured) joins with more than twenty years' experience in senior roles at media, digital and advertising businesses. For the past decade, he has worked at Dentsu Aegis Network (previously Aegis Group), where he latterly served as Executive Chairman, UK & Ireland, having previously been CEO of Asia Pacific. Earlier he worked for global media agency Mindshare, most recently as CEO EMEA, having begun his career as a Media Planner at Ogilvy.

In his new role, Waters replaces Karg, who stepped down at the end of last year - the role has been filled on an interim basis by former YouGov CFO Alan Newman. Rob Woodward, Group Chairman, thanked Newman for his contribution and said of the appointment: 'Nick has an outstanding track record of leading global media and marketing businesses, which will greatly benefit Ebiquity. He is an excellent addition to our executive team and brings a wealth of knowledge and experience in the media sector'.

During the pandemic, Ebiquity has implemented a remote working policy for all locations globally, although staff in China have now returned to their offices. The senior management team and Board have taken a 20% salary reduction in salary, and there has been a deferral of the annual pay review and temporary freeze on recruitment, while Ebiquity has furloughed staff in the UK and France, and received funds from the US Payroll Protection Program.