Marcoms giant WPP has withdrawn around £200,000 in share awards from founder and former CEO Sir Martin Sorrell, who it claims leaked confidential information to a journalist following his departure in 2018. 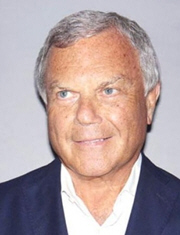 Sorrell (pictured), who ran WPP for 33 years, stepped down in April of that year, after it was announced that the Board had hired an independent lawyer to investigate media claims of 'personal misconduct', which he has always denied. At the time, he was treated as having retired, and dependent on future company performance, was due to receive share awards totalling up to £20m: however, nearly a third of WPP's shareholders then rejected the Board's decision to give Sorrell the £20m share award.

He then set up data, content and programmatic investment vehicle S4Capital. Last year, the firm raised £116m through the issue of 36.8 million shares, with proceeds from the sale earmarked to fund further acquisitions.

Since leaving WPP, Sorrell has received £3m in pay-outs relating to company performance in 2014 and 2015, but WPP is now refusing to honour awards granted in 2016 and 2017, saying that these will lapse 'as a result of Sir Martin Sorrell's disclosure of confidential information belonging to WPP and certain of its clients to the media during his tenure as a WPP director'. According to the FT, investigations by WPP, triggered by the initial dispute over his conduct as CEO, uncovered e-mails showing Sorrell had shared details of client plans and WPP transactions with a journalist. Sorrell has described WPP's decision as a 'petty' move 'driven by anger' and says he has now put the matter in the hands of his lawyers.