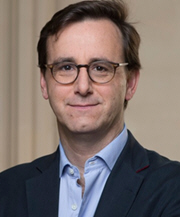 The Worldpanel division measures and advises on consumer and shopper behaviour, offering insight-based consulting on clients' marketing and business strategies. Bacuvier (pictured) most recently served as Global CEO of Tesco-owned customer data firm dunnhumby. He previously worked at Google for more than a decade, having begun his career as a strategy consultant in BoozAllen Hamilton's TMT practice, and then moved to Orange Group.

Ian Griffiths, Deputy CEO and CFO, said: 'Guillaume's expertise and experience will prove invaluable. He is an experienced, international CEO combining world-class technology credentials with a deep understanding of consumer behaviour and the retail and media landscapes. He also has a proven track record in transforming a data business and holds excellent relationships with retailers and FMCG/CPG brands across the world'.