Kantar has added the newly created role of Deputy Chief Executive to the role of Chief Financial Officer Ian Griffiths. 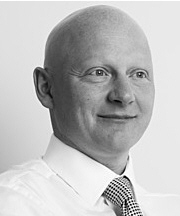 Griffiths (pictured) joined in January following WPP's 60% sale of Kantar to private equity firm Bain Capital. He previously spent more than a decade at British commercial broadcaster ITV, where he helped transform the business from one reliant on UK advertising to a more diverse international and increasingly digital business. Earlier, he worked for media group EMAP, latterly as Group Finance Director, having begun his career at Ernst & Young.

Griffiths takes up the additional role following the departure of former CEO Eric Salama. In his expanded position, Griffiths will lead the Executive Committee's running of the business until a replacement for Salama has been identified.

Chairman Adam Crozier, who joined Kantar from ITV in February, comments: 'The new role of deputy CEO strengthens Kantar's operational capabilities in the short-term as we navigate our own recovery from the economic crisis and in the long-term as we implement our transformation agenda. As we observed when Ian joined the business in January, he brings a wealth of experience and great track record in delivering transformations and strong returns, so he is a natural fit for this expanded leadership responsibility'.