In the UK, the Market Research Society (MRS) has given this year's Agency of the Year Award to London-based insight firm Opinium, which had previously been shortlisted eight times in nine years. 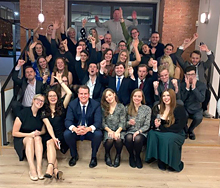 Founded in 2007, Opinium offers qual and quant research and consultancy across five practice areas - brand and communications, product and service development, stakeholder, market intelligence and thought leadership. In addition, the company owns and manages panels of UK consumers, IFAs and small businesses, and runs an omnibus of UK adults. Judges of the MRS Awards said Opinium 'consistently delivered excellence over the past twelve months, going above and beyond its clients' expectations, opening a new office in New York and achieving impressive financial results'.

MRS CEO Jane Frost comments: 'This year's entries were outstanding in terms of their innovation and impact, and are great exemplars for the power of research and insight. Congratulations to all the winners and thank you to the MRS Awards team for yet again delivering a slick and entertaining ceremony, under challenging circumstances'.

A full list of all the winners will be published on the MRS web site at www.mrs.org.uk .