Industry body ESOMAR is to rerun its elections for Council after uncovering 'serious misconduct'. Two members of staff have been fired, and DRNO understands that recently appointed CEO Parves Khan is one of them. ESOMAR stresses that no complaints have been made about the conduct of candidates. Editor's note 3rd January: a court has since ruled that the allegations against Dr Khan found 'no support in the facts whatsoever' - see update here 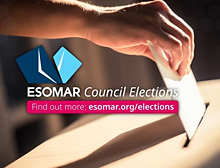 Last month, ESOMAR announced the election of Nikki Lavoie as its 2023-2024 Council President, along with eight newly elected representatives hailing from five continents. The association now says an investigation into the election has turned up sufficient evidence to conclude that interference occurred during the process, and the results must be considered invalid.

In a statement, ESOMAR said: 'Regrettably, the investigation has identified serious misconduct on the part of members of ESOMAR staff during the course of the most recent election cycle, as well as during the subsequent investigation'.

The Association's President, Kristin Luck, said: 'Ensuring the integrity of ESOMAR's processes, both internal and external, is our top priority as a Council. Concluding this process, including conducting new elections, will ensure we can best represent our members as the global voice of the data, insights and analytics industry'.