Continuing our special features on Insight in the Mobile Age Abraham Muller, CTO at Brandwatch Qriously, looks at how mobile methods can make election polling easier to implement and more accurate. 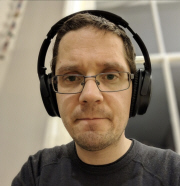 Abraham Muller (pictured right) is co-founder and CTO at Qriously, an innovative survey company acquired by Brandwatch last year. Qriously asks consumers questions via ads on mobile apps. Having spent ten years at Qriously, he has seen many changes to the product and overseen many projects, including successful election predictions. He is based in London.


Henry Durant, a British polling pioneer, once called opinion polling 'the stupidest of professions'. Why would someone risk their reputation on a prediction that could be so easily misled?

Recently we've seen the polls get things wrong left, right, and centre, but it's always been an imprecise practice.

One of the most infamous polling defeats was during the Roosevelt-Landon Presidential contest of 1936. At that time, the leading poll of the day was conducted by The Literary Digest Magazine, which had a good record of picking presidential winners. The polling process was quite the operation - several thousand workers reached millions of respondents who had been selected from, among a few other things, telephone directories.

The Digest confidently asserted that Republican Alf Landon would beat the Democrat Franklin Roosevelt, but the results would prove them quite wrong - Landon suffered the worst defeat in US history.

It was actually George Gallup's American Institute of Public Opinion, founded the year before the election, that called the correct result. Gallup favored a different way of selecting respondents, polling a relatively tiny proportion of US citizens compared to the Digest's study and instructing his interviewers to seek out very specific groups of people. This method of sampling meant a large sample size wasn't needed to get a representative view of what the electorate was thinking.

The trouble with selecting respondents from telephone directories at the time was that, during the Great Depression, only the wealthiest citizens tended to have access to a home telephone. The Digest's respondents would be wealthier than the general population and more likely to vote Republican, which was reflected in their incorrect prediction.

Fast forward 83 years, and times have changed rather dramatically. The mobile phone, unlike the landline of the 1930's, is a staple of modern society and a medium through which large and highly representative samples of people can be polled. At Brandwatch Qriously, we believe they are also the medium on which the best election predictions can be made. We've proved it, too - Qriously correctly called last month's UK General Election, predicted the Labour surge in the 2017 Election, and forecast the result of the Brexit referendum. 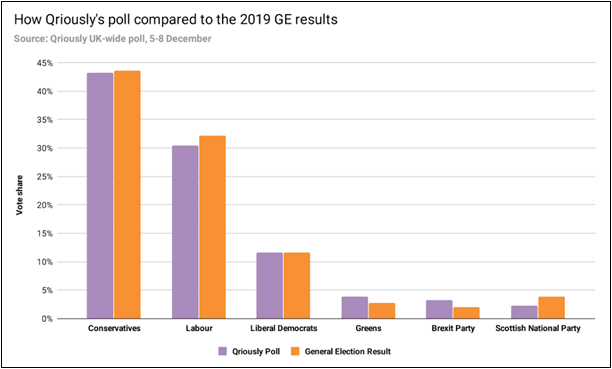 Brandwatch Qriously is the only member of the British Polling Council which uses already established mobile advertisement infrastructure to collect data for an accurate prediction. To reach respondents, the team bid on advertising spots in ad-supported mobile apps, and show a neutral survey question instead of an advert. When someone answers that question, they'll be shown the full survey.

For the 2019 General Election, we asked people if they are registered to vote, and how likely they were to vote, on a scale of 0-10. Only respondents that stated 9 or 10 were then included in the study and asked who they intended to vote for.

While we're theoretically able to reach two billion respondents worldwide, the focus when it comes to election prediction is on representation.

'For the 2019 General Election prediction, we ensured our data was representative of the UK adult population in terms of age, gender, region, the type of constituency (counties versus boroughs) and education level', says Brandwatch Research Data Scientist Peter Fairfax, who worked on the project. 'You absolutely need your data to represent the people whose behavior you're trying to predict. This is why gigantic polls involving huge numbers of people can produce bad predictions'.

That results are collected using ads on mobile apps is what differentiates Brandwatch Qriously from other modern pollsters, and our strength lies in our ability to weight the data gathered to represent the opinions of large swathes of voters and consumers.

'The thing people worry about when they hear how Qriously works is that they will get a biased sample', says Billiejoe Charlton, a lead Data Scientist on the election prediction project. For example, one might imagine that young people would make up the large majority of respondents to their surveys.

'Firstly that's untrue because we do get respondents across all sections of society', he says. 'Secondly, we don't just ask people about their political views. We also ask them about themselves - how old they are, whether they're male or female, what qualifications they have, etc. So if there is a skew in the sample, we know about it and know how to account for it, so we can still fairly represent the views of the whole population'.

Incentivization is also a key differentiator. Billiejoe continues: 'Because Qriously's survey process is anonymous, respondents can answer honestly and don't feel pressured into giving more socially acceptable answers, such as pretending they vote when they don't. Plus, Qriously's non-incentivised data collection methodology avoids 'professional survey takers' - people who actively seek out online surveys offering paid incentives that might speed through the surveys just to get the reward'.

Qriously's success at generating accurate election predictions ties back to the issues faced by those attempting to estimate the results of the 1936 US Election: Representative samples are paramount (just polling those most convenient to reach is a poor alternative), and larger surveys don't always offer more accurate results (even by polling millions of people, you can come up with a totally inaccurate prediction).

The mobile age makes predicting elections, market research, and surveying generally easier to implement and more accurate. And, with the US Elections around the corner, the Qriously team are gearing up for their next big prediction project.


For a demo of how you can make accurate predictions using Qriously, visit: www.brandwatch.com/products/qriously